posted by Kathryn on April 22,2015 in Uncategorized

How many Anabaptists died during the sixteenth century persecution in Europe? No one knows for sure. What is certain is that at least 1,500 were cruelly tortured and killed. For the most part these were peaceful citizens who did not believe in war and who became the forerunners of today’s Mennonites and Amish. The main complaint of the authorities against them was that they did not believe infant baptism had any value. They chose to be re-baptized as willing adults.

Although no other charges were proven against them, they were sentenced to death. For the men death was usually by fire; for women it was by drowning. Many Anabaptists proved to be so bold in their final testimony for Christ that authorities began to clamp their tongues before leading them out to their execution so that they could not speak up and win more converts.

“For whoever wants to save his life will lose it, but whoever loses his life for me will save it.” Luke 9:24

One of the Anabaptists who died in flames was Dirk Willem. His story is particularly touching, because he forfeited a real chance to escape when he turned back to help one of his pursuers.

Dirk was captured and imprisoned in his home town of Asperen in the Netherlands. Knowing that his fate would be death if he remained in prison, Dirk made a rope of strips of cloth and slid down it over the prison wall. A guard chased him. 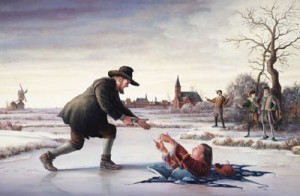 Frost had covered a nearby pond with a thin layer of ice. Dirk risked a dash across it. He made it to safety, but the ice broke under his pursuer who cried for help. Dirk believed the Scripture that a man should help his enemies. He immediately turned back and pulled the floundering man from the frigid water. In gratitude for his life, the man would have let Dirk escape, but a Burgomaster (chief magistrate) standing on the shore sternly ordered him to arrest Dirk and bring him back, reminding him of the oath he had sworn as an officer of the peace.

Back to prison went Dirk. He was condemned to death for being re-baptized, allowing secret church services in his home and letting others be baptized there. The record of his sentencing concludes: “all of which is contrary to our holy Christian faith, and to the decrees of his royal majesty, and ought not to be tolerated, but severely punished, for an example to others; therefore, we the aforesaid judges, having, with mature deliberation of council, examined and considered all that was to be considered in this matter, have condemned and do condemn by these presents in the name; and in the behalf, of his royal majesty, as Count of Holland, the aforesaid Dirk Willems, prisoner, persisting obstinately in his opinion, that he shall be executed with fire, until death ensues; and declare all his property confiscated, for the benefit of his royal majesty.”