posted by Kathryn on April 8,2015 in Missionaries

CHARLES DE FOUCAULD was born in Strasbourg, France on September 15th, 1858. Orphaned at the age of six, he and his sister Marie were raised by their grandfather in whose footsteps he followed by taking up a military career.

He lost his faith as an adolescent. His taste for easy living was well known to all and yet he showed that he could be strong willed and constant in difficult situations. He undertook a risky exploration of Morocco (1883-1884). Seeing the way Muslims expressed their faith questioned him and he began repeating, “My God, if you exist, let me come to know you.”

The opening quote on this website is one belonging to Charles de Foucauld. “The one thing we owe absolutely to God is never to be afraid of anything.” This is a man who lived and died serving those whom Jesus loves.

On his return to France, the warm, respectful welcome he received from his deeply Christian family made him continue his search. He rediscovered God in October 1886 when he was 28 years old. “As soon as I believed in God, I understood that I could not do otherwise than to live for him alone.” 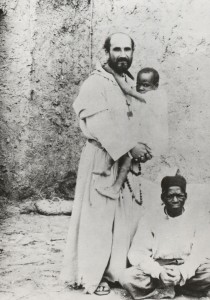 A pilgrimage to the Holy Land revealed his vocation to him: to follow Jesus in his life at Nazareth. He spent 7 years as a Trappist, first in France and then at Akbès in Syria. Later he began to lead a life of prayer and adoration, alone, near a convent of Poor Clares in Nazareth.

In 1901, at 43 years of age, he left for the Sahara, living at first in Beni Abbès and later at Tamanrasset among the Tuaregs of the Hoggar. Living close to the Tuareg people, and sharing their life and hardships, he made a ten-year study of their language and cultural traditions. He learned the Tuareg language and worked on a dictionary and grammar. His dictionary manuscript was published posthumously in four volumes and has become known among Berberologues for its rich and apt descriptions. He wanted to be among those who were, “the furthest removed, the most abandoned.” He wanted all who drew close to him to find in him a brother, “a universal brother.” In a great respect for the culture and faith of those among whom he lived, his desire was to “shout the Gospel with his life.” “I would like to be sufficiently good that people would say, “If such is the servant, what must the Master be like?”

On December 1, 1916, de Foucauld was dragged from his fortress by a gang of armed bandits led by El Madani ag Soba, who was connected with the Senussi Bedouin. Their intention was to kidnap de Foucauld, but when the gang was disturbed by two guardsmen, one startled bandit (15-year-old Sermi ag Thora) shot their prisoner through the head, killing him instantly.